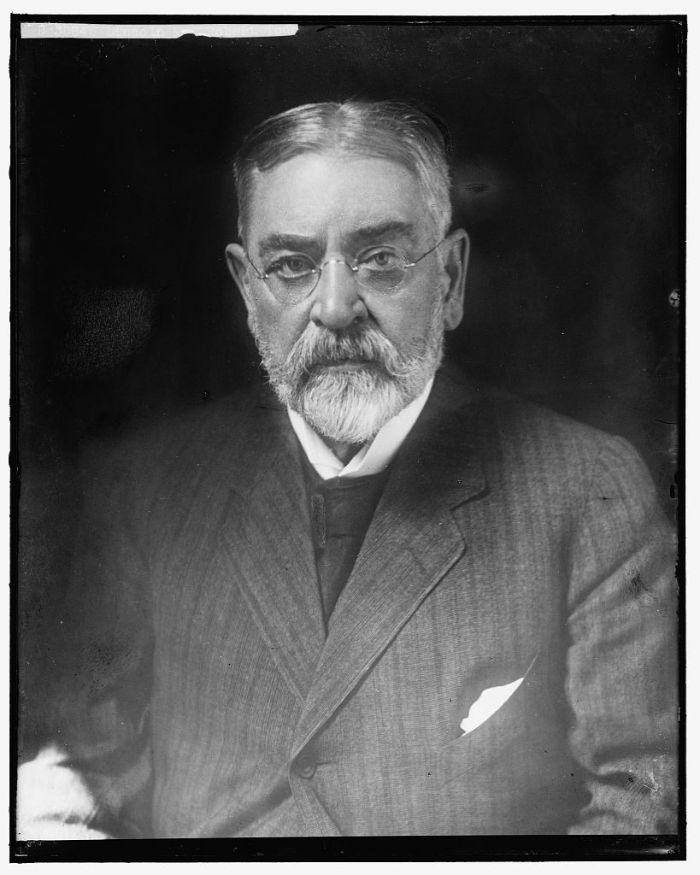 Robert Todd Lincoln, the eldest son of President Abraham and Mrs. Lincoln, joined Ekwanok in 1903 and the following year was elected president, a post he held continuously until his death in 1926.

Lincoln was born in Springfield, Illinois and graduated from Harvard College before serving on the staff of Ulysses S. Grant as a captain in the Union Army in the closing days of the Civil War. After the war, he married Mary Harlan, daughter of a U.S. senator, and they had three children together. Following completion of law school in Chicago, he built a successful law practice there with Edward Isham, starting in 1872. Isham was a Vermont native who had built a summer home in Manchester, VT that Lincoln often visited with Isham, including while Isham was Ekwanok’s first president (1899-1902). Lincoln had earlier been introduced to Manchester when he and his mother and brother spent two summers at the Equinox Hotel in 1863 and 1864.

Active in Republican politics, Lincoln accepted appointments as secretary of war (1881-1885) in the administrations of Presidents Garfield and Arthur, and was the U.S. Ambassador to the United Kingdom (1889-1893) in the Benjamin Harrison administration. He also was general counsel for the Pullman Car Company, maker of the famous Pullman sleeping cars for railroads, and after the company’s founder died in 1897, Lincoln became the company's president for 14 years.

Lincoln had a fondness for the Manchester area, wanted to build a summer home there, and asked his law partner if he could buy some of Isham’s land. Isham is reported to have replied: "You're my best friend and law partner, but you're not going to be my next-door neighbor." But after Isham died in 1902, Lincoln purchased 400 acres from the Isham estate and started construction of “Hildene.” The 24-room Georgian- revival-style mansion was completed in 1905 and added to the National Register of Historic Places in 1977.

Lincoln was introduced to golf by Charles Blair MacDonald, a leading figure in early American golf, who invited Lincoln to join a group of men at the Chicago Club in July 1893 to organize the Chicago Golf Club, which had the first 18-hole golf course in North America. Lincoln became one of the golf club’s founding members and was elected its president in 1905 and again in 1906, while he was also serving as president of Ekwanok.

When MacDonald introduced Lincoln to golf, Lincoln was then in his early 50s — too old to become a good golfer — but he developed some talent by taking lessons from MacDonald and Jim Foulis Jr., Chicago’s renowned professional and the winner of the second U.S. Open championship. Lincoln was popular, became enthusiastic about the game, and was frequently invited to play with top golfers and professionals. In 1900, Colonel George Harvey, later U.S. Ambassador to Great Britain, sponsored J.H. Taylor, the then Open champion of Great Britain, in his visit to the United States. Harvey contacted Lincoln, and they discussed making arrangements for a golf game at Harvey’s golf club in Deal, New Jersey. Lincoln phoned MacDonald who agreed to join the group, as Lincoln’s partner, playing against Taylor and Morgan J. O’Brien, a New York jurist and friend of Col. Harvey’s.

The match was even coming into the last hole, a short hole over water. As MacDonald described the events that took place:

“It was Lincoln’s turn to drive. I cautioned him to take an iron with which he was extremely good, and not his driver with which he had been playing erratically. Nothing daunted he said, ‘I shall take my driver’ with the determination of reaching the green off the tee. Taking a mighty swipe at the ball, he sliced badly to the right onto a tennis court, ending up under the net. As they were playing ‘alternative shots,’ it was then MacDonald’s turn to recover a good shot to the green, explaining the result as follows: ‘Miraculously, I drove the ball close to 150 yards, ending up five feet from the hole. Lincoln holed the putt, tying the hole and the match.”

Lincoln took his presidency at Ekwanok seriously. During his long and successful law partnership with Edward Isham, the two men developed a close friendship of mutual respect. It soon became apparent that the Lincoln years at Ekwanok would continue the same qualities of leadership and high standards set by Isham during the Club’s founding years.

Lincoln was chairman of the Finance Committee for all the years he served as president, spending the Club’s money wisely as needed for improvements. As busy as he was with business affairs, he attended a majority of Board meetings and all Annual meetings of Stockholders, except the July meeting in 1926 just weeks before he died.

He brought many notable people to the Club. David Lloyd George, British statesman who became Prime Minister of Britain in World War I, was one of many who stopped for an overnight visit with Lincoln. The two had met in London and both enjoyed conversations about politics and philosophy. William Howard Taft, a life-long avid golfer and fisherman, stopped to play golf with Lincoln on several occasions. Taft had a fishing camp in Maine and stopped in Manchester while passing through on the train. Henry Ford played a round of golf with Lincoln in July, 1923. A month later Lincoln closed the golf course one afternoon as a tribute to his friend, Warren G. Harding, whose funeral was held on that day. Both Harding and Taft had participated in the dedication of the Lincoln Memorial in Washington, D.C., with Lincoln in attendance, in May 1922.

Whenever Lincoln came to the Clubhouse, whether alone or with a visiting friend, the atmosphere took on an aura of dignity and respect despite his attempts to put everyone at ease. He was constantly in the uncomfortable position of being criticized for an assumed attempt to capitalize on his father’s name, while if he tried to avoid the public gaze, he was considered snobbish, cold, and aloof. He loved his home at Hildene, where he could roam through his gardens, look at the Green Mountain range and Mount Equinox, and study the movement of stars from his observatory.

Though Lincoln did not play in any of the Club’s annual tournaments, he was interested in watching notable golfers who came to play the course, and he participated in the awarding of trophies to the winners of tournaments, particularly the Isham and Equinox Cups. From the long porch of the Clubhouse, he followed the contestants with his telescope, reporting the progress of matches to friends standing nearby. The “Lincoln Foursome,” well-known to the membership, played regularly whenever Lincoln was in residence. The other members of the foursome were George Thatcher, Robert Janney, and Horace Young, all Board members and close friends.

On the morning of July 26, 1926, Lincoln was found dead at Hildene by his butler who was bringing him his breakfast. This was six days before his 83rd birthday. The cause was later diagnosed as a cerebral hemorrhage. Private funeral services followed at Hildene and the Manchester Congregational Church, and, after his remains were held in a receiving vault at Dellwood Cemetery in Manchester, he was buried in Arlington National Cemetery, across the Potomac River from Washington, D.C.

At a special meeting of the Ekwanok Board of Governors, a resolution was passed which, in part, stated,

“When Mr. Lincoln was first elected our president in 1904, and entered upon the duties of his office, his individuality, unlike his name, was little known to most of us, but soon thereafter, a personality disclosed itself in him characteristic of a winsome quality and wisdom that won the hearts and excited the admiration of all about him.”

“It is not for us to chronicle the career of one whose life and public service are events of worldwide repute. It is for us who are so closely associated with him in the later years of his life to give our sorrow words and express our deep sense of personal loss by the death of Mr. Lincoln, of whom we shall cherish in memory, images, and precious thoughts that shall not die and cannot be destroyed.”