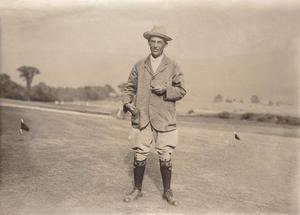 Co-designer, with John Duncan Dunn, of Ekwanok’s golf course in 1899

“There never will be another Walter J.”

The names of champion golfers have been recorded in the history of the game for nearly 150 years. Names such as Tom Morris, Willie Park, Willie Dunn, John Low, C.B. Macdonald, Jerry Travers, W.C. Fownes, Francis Ouimet, Bobby Jones, Arnold Palmer, Jack Nicklaus, and Tiger Woods are, and will be, remembered by many of today’s golfers and golf historians.

They are remembered as “champions,” but some were also involved in golf-related activities — as course architects, rules officials, designers of golf equipment, editors and publishers of books and magazines, advocates of certain methods of practice, golf course construction and maintenance, promoters of strategies for practice and for winning a match, and as teachers of the game. While some became expert in one or more of these golf-related activities, Travis was recognized as an authority in all of them, and more, in his endless search for perfection in playing the game and promoting an understanding of golf’s rules, customs and traditions for all to enjoy.

Born in Australia in 1862, Travis attended schools in Melbourne before coming to America in 1886. In America he worked for a Melbourne hardware and construction company based in Australia and New York, and he later worked for a Wall Street investment firm. In 1890 he became a naturalized citizen of the United States.

His golf career was short by all standards. It started in 1896 when, at age 34, he bought his first set of golf clubs in England during a business trip to London. In a matter of weeks he joined a newly-formed golf club in Bayside, New York, and he bought all of the books on golf he could find and immersed himself in the fundamentals of the game. Right after joining his first golf club, he entered a club tournament and won the handicap event, and low gross score, and brought home his first, and “most treasured trophy,” a pewter tankard. With his late start in golf, he became known, respectfully, as “The Old Man.”

Two years after he hit his first golf ball, Travis qualified to play in the 1898 U.S. Amateur Championship. He practiced incessantly, but two weeks before the event he spent a week in bed with malaria which left him in a weakened condition. After surviving the early rounds in the Amateur, Travis lost in the semi-finals to Findlay S. Douglas, a 23-year-old Scotsman who was recognized as the leading contender for the title. The following year he met Douglas again in the semi-finals of the Amateur and was beaten once more. But that would be the last time Douglas would beat Travis, and Travis had by now firmly established his reputation as a player to be watched.

Ekwanok was founded in the summer of 1899, and the organizers of the Club hired Travis and John Duncan Dunn, a well-known golf course designer and scion of the famous golfing family, to design and oversee the construction of the Club’s course. Work began immediately and was finished by the following summer. In recognition of his work in designing and supervising the construction of the golf course, the Club’s Board of Governors awarded Travis a lifetime Honorary Membership on January 2, 1900. He was the 31st member to be admitted to the Club membership.

During the summer of 1900, at age 38, Travis reached, according to the New York Times, “the pinnacle of his golfing ambition, for which he has been striving zealously for several seasons”: he won his first U.S. Amateur Championship (defeating Findlay Douglas in the final, 3 and 2), and won the medalist trophy as well (lowest score in the medal-play qualifying rounds), at his new home club, the Garden City Golf Club in New York. According to the Times: “One spectator, while watching Travis reel off hole after hole in machinelike accuracy, remarked: ‘Well, I have only one fault to find with Travis’ game. He doesn’t hit the ball enough, for all he has to do is hit it three or four times and it is in the hole.’ ”

Travis successfully defended his Amateur and medalist titles in 1901 (defeating Walter Egan 5 and 4), was the medalist in the 1902 Amateur – the same year he finished second in the U.S. Open, and he won the Amateur once more in 1903 (winning 4 and 3 over Eben Byers), thereby becoming the first person to win three U.S. Amateur titles. Travis was also the Amateur medalist in 1906 (when Byers won the title), and in 1907 and 1908 (when Jerome Travers started his remarkable career as the leading Amateur Champion). Travis won many state and regional championships and medalist titles; far more than any other player.

By 1904 Travis decided to journey to Great Britain to compete in “The Amateur Championship” (i.e., the British Amateur Championship), held that year at the Royal St. George’s Golf Club in Sandwich, England. He was welcomed by several professionals who knew about his amazing record in America, but his reception at the Amateur made him feel that he was an unwanted contestant. He was assigned an inexperienced, cross-eyed caddie who irritated him; but he was there to win the Amateur, and he did! He defeated former two-time Amateur champions Harold Hilton and Horace Hutchinson, and in the final round he met Great Britain’s longest hitter, Ted Blackwell. Although Blackwell out-drove him on every hole, Travis, with stellar iron play and a center-shafted Schenectady Putter, managed to beat his opponent 4 and 3. Travis was the first player from America to win the British Amateur.

Several years later the R. & A. banned the Schenectady Putter, describing it as a mallet, but the U.S.G.A. did not go along with the ban. This new club became a huge success in America, and later in Great Britain after they removed the ban. (Several Schenectady Putters are displayed in the Club’s Founders’ Room.)

During the period that Travis was winning major tournaments, he pioneered in the study of grasses for greens and fairways years before the U.S.G.A. organized the Green Section. For seven years Travis repeatedly pressured the U.S.G.A. until they finally organized a program to study turf and grasses suitable for different conditions of climate, rainfall, and temperature.

Travis founded and was editor and publisher of “The American Golfer” magazine in 1908 — dedicating it to comments, instruction, gossip, and golf’s highest ideals. He had published his first book “Practical Golf” in 1901 and soon after his next book, “The Art of Putting.” But now his monthly magazine gave Travis an immediate audience for the many concepts he developed about golf. He promoted the correct use of terms relating to golf such as: the committee in charge of the golf course is a “Green Committee,” and many other terms used in Scotland from the beginnings of the game. He recommended oiling wood shafts of clubs, but “only when they are thoroughly dry.” He experimented with sand and gave advice on the use of “fine, sharp, white sand” for building and maintaining greens.

Of the many legacies that Travis left to the golfing world, the most visible are the 51 courses he designed, modified, or served as a consultant for during a period of 27 years. Starting in 1899 with his first, Ekwanok, he arranged to work with John Duncan Dunn who apprenticed in Scotland with his father, a designer of over 130 courses in Great Britain. The talents of these two men complemented each other, and they later worked together in remodeling the Flushing Country Club in Flushing, NY, in 1901, and the Essex Country Club in Manchester, Massachusetts in 1908. They also designed the back nine holes for the course at Cape Arundel Golf Club in Kennebunkport, Maine in 1919, redesigning the original nine in the process.

Travis remodeled his home course, Garden City Golf Club, in Garden City, NY, in 1906 and installed a practice putting green with half-size holes where he would spend hours perfecting his putting skills. In 1919, Travis designed both 18-hole courses for the Westchester Country Club in Rye, NY; each layout is a championship course where many amateur and professional tournaments are scheduled year after year. Later in 1919, Travis was hired to bring the course at the Columbia Country Club (Chevy Chase, MD) up to U.S. Open standards, and the club hosted the Open in 1921. Also in 1921, Travis was invited to talk to a group in Ontario, Canada about building a course near Niagara Falls. They had been considering a nine-hole course, but Travis felt that the property was so spectacular he convinced them to build an 18-hole course. The course today, Lookout Point, has a commanding view from its hillside location where the mist rising from Niagara Falls can be seen 20 miles away.

His consulting work included: working with Donald Ross to completely change Pinehurst No. 2 from a ladies’ course to the championship layout it is today (1904) and to remodel the course at the Chevy Chase Club (Chevy Chase, MD; 1910); and consulting with George Crump and possibly creating designs for 17 of the holes at Pine Valley Golf Club (Pine Valley, NJ; 1915).

In 1903 Travis wrote a letter to a young student at St. Paul’s school in Garden City to whom he had given some advice and encouragement after watching him hit golf balls. His letter, in part read: “Golf develops the good qualities of a man’s nature and softens the poor ones. It cultivates patience and endurance under adversity and yet keeps the fires of hope alive. It is a leveler of rank and class where rich men and poor meet on common ground.”

The young student who Travis had befriended was John Ellis Knowles. Knowles became Intercollegiate champion while a student at Yale and soon qualified to play in the U.S. Amateur. He played in the Amateur two consecutive years but never survived the quarter-final round. He was a member of Apawamis, served as president, won the club championship sixteen times and also won club championships at Round Hill and Pine Valley. He was also a member, and great friend, of Ekwanok. Travis did not live long enough to know of Ellis’ exceptional lifetime record, but Ellis often recalled and lived by the advice given to him by Travis.

In 1915, as Travis was getting ready to retire from participating in major tournaments, he won the Metropolitan Amateur, for the third time, by defeating John G. Anderson in a field that included several national champions. Travis was then 53 years old, competing against men half his age. In a speech made at the conclusion of the championship, Anderson praised Travis for his many contributions to golf and added:

“American golfers as a body must and do grant that in his withdrawal goes a man from active participation in the greatest game we have, who has and will forever play the game with the finest of spirit of sportsmanship, the strictest personal adherence to the rules, a splendid opponent, a generous victor, and a lion in defeat. No one ever heard Mr. Travis make an excuse. Did you ever think of that you golfers? Surely all of us, when we gather round the festive club banquets this year, should toast the past performances and the love, the passionate love, which he gives to the sport which we too love as best we can. Golfers may come and go but there will never be another ‘Walter J.’ the name by which his friends know him best.”

In his remaining years, Travis suffered from a bronchial condition that later developed into tuberculosis. He was unable to devote his usual five to six days of intensive practice and concentration to play tournament golf.

Walter J. Travis died in his sleep on July 31, 1927 in Denver, Colorado and, according to his wishes, he was cremated and buried at Dellwood Cemetery in Manchester, VT, about 400 yards from Ekwanok, the course to which he was devoted and loved during his lifetime.